Picking Up Bad Habits from Others

You may feel that you have evaded the bad habits that many people have.  That is, you feel that way until you catch yourself picking up the bad habits of others around you.  The other person may pass on their habits intentionally or not, but they affect you all the same.

You can pick up bad habits from others in the way they eat.  If you spend enough time around a person, you will often begin to eat the same way.  It is just easier to make one meal and split it.  It is easier to go to one restaurant instead of stopping at two.  If that restaurant happens to have only greasy foods, you will end up eating things you would not otherwise eat.  You are picking up your companion's bad habits.

Smoking cigarettes is another bad habit you can easily pick up from other people.  You sit in the room with your companion evening after evening as they puff away.  You gradually either get very sick from it, or you get used to it.  You may even come to enjoy it.  That is when you are in danger of picking up the bad habit.

Fighting is a bad habit that many couples get into in a relationship.  Your spouse may start a fight.  You may have no intention of getting into the argument.  You may get up to walk away from it.  However, your spouse may not let you go.  A fight ensues and pretty soon, you are both in it.  This may go on over and over until it becomes a bad habit.

In the workplace, carelessness seems to be contagious.  If one crew member is irresponsible with the heavy equipment, his attitude can contaminate the attitudes of the other workers.  Before you know it, they all have bad habits at work.

Also, if one employee gets in the bad habit of telling everything he knows, the habit can spread.  If one tells information about his pay, soon they all will.  If one tells private company business, the gossip mill will start churning.  The bad habits can get out of control.

If you have the bad habit of practicing one-upmanship, you can lead others to pick up the bad habit from you.  A person tells something they did, and suddenly you are telling the better thing you did.  Some people will fall into the trap of following your lead and trying to one-up you.  This can go on ad infinitum.

Pessimistic people have the bad habit of looking on the negative side of everything.  This can rub off on anyone who spends a good deal of time with them.  You can only hear about the worst things in life so long before it has an affect on you.  You may be next to predict bad times ahead.

Of course, you cannot blame the other person for your choice.  That is all up to you.  If you want to avoid the bad habits of others, you can do it if you stay strong.  Remember that you do not have to always conform to those around you. 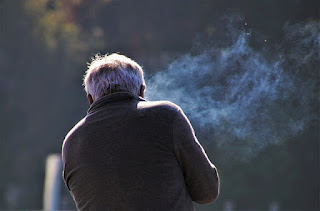